All classics where once innovations. Quick! If I say “Vienna” what picture do people get in their heads?

I am going to guess that most see something old. Like the St. Stephen’s Cathedral at Stephansplatz, a picture of Mozart – or a carriage and a horse.

That is the image that Vienna has.
Of something old. Centuries old.

It is almost like people look at Vienna as a museum of western creative brilliance from the past.

(The Mozart souvenirs are everywhere…) 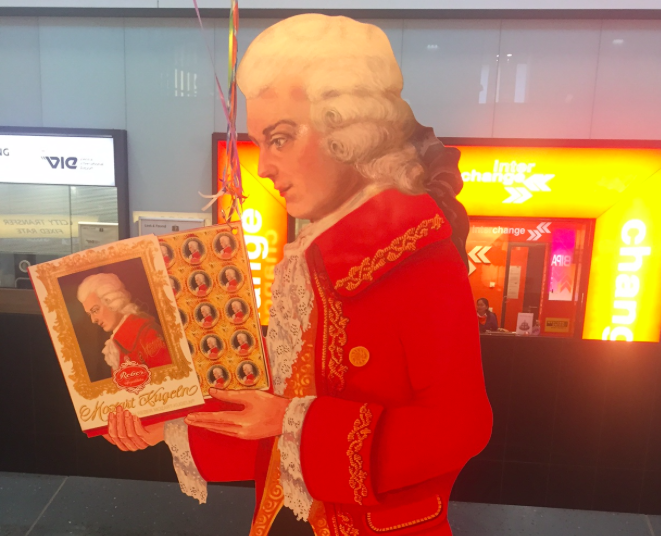 But I think it is very unfortunate to look at Vienna as a museum of times past.

Because innovation is not about the past. It is about the future.

That was a thought, or shall I say, an idea, that struck me today as I was walking around on Donauinsel, a long and narrow island situated in the Danaue River which flows through the center of Vienna. Donauinsel is a unique island. The island is more than 20 (!) kilometers long – but just 70-100 meters wide. The car free island is like a huge park that Viennians (is that a word?) can escape too to run, walk their dogs, stroll or swim.

A women out running, whom i got a chance to talk to, told me that the island had almost disappeared in the 1970’s because politicians wanted to build an electric damm but some strong willed people saved the park-like island for the people of Vienna. (At least that is what I think she told me since she told the stories in German, a language I am afraid I do not speak…) Either way it was very clear in the passion in this womans voice that Donauinsel means a lot for the people of Vienna.

In the summer the island explodes with activities such as concerts and races and there are even a couple of nudists beaches on the island.

When I was walking around on the island I was struck by how you could see old churches and an old light house, but at the same time shining, modern and tall office buildings in glass, and graffiti on the bridges connecting the islands to the main land. 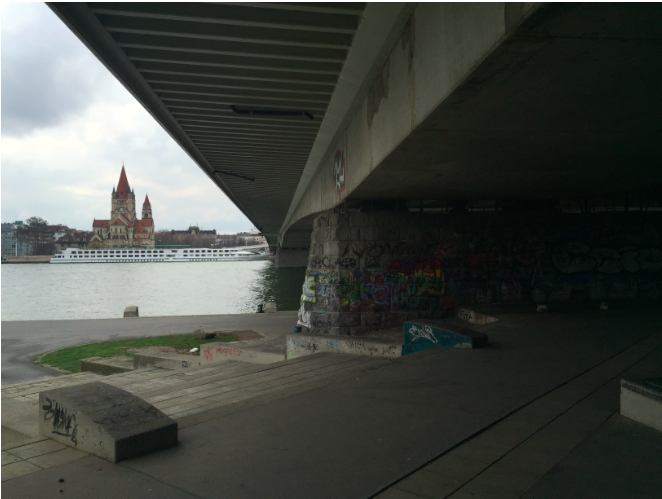 On the way to the island I had walked though the center of Vienna and had happened to walk by the exhibition “Happy” by the designer Stefan Sagmeister that was showing in the MAK Museum.

The MAK Museum is an old, majestic and historic building complete with coloured glass windows in the ceiling and status of old, serious looking men. At first it seemed like such a stark contrast to the building. But the more I walked around in the show the more I realised that they were just two sides of the same coin, only separated by time.

Stefan Sagmeister is a Austrian graphic designer who now lives in New York. (Be sure to watch his TED talks on the value of taking time off and Happiness by design.)

He is one of the most celebrated Austrian designers of our time.

When I was walking through the building to go from one part of the exibithion to another you had to walk though one of the permanent section of the museum. It was filled with old furniture, glassware and vases. It was such a stark contrast to the Happy show.

At first glance it felt stuffy, out-dated and old.

But while I was walking through it I understood why they had left it there: It was to show how these exhibitions of old things once had been new and novel innovations.

One of my all time favourite quotes is from Coco Channel who said: “Innovation! One cannot be forever innovating. I want to create classics”

The way I read that it was meant as an ambition to see longer than the latest trend and to create creations that would stand the test of time.

But I guess we could re-write the quote to communicate a different truth: “Classics, Classics. One cannot be forever looking at the classics without seeing that they once were innovations too.”

Because that is what became so clear today with all those new ideas being shown in an environment full of old classics: Every classic was ones an idea that someone created.

When we see those old, historic classics from historic times it is easy to think that they were conservative – but they often were not. They were often cutting edge. They were edgy, provocative and often questioned and/or ridiculed.

They became timeless classics because they were brilliant innovations. Creative creations.

I left Vienna not with a feeling of looking back in history: but of looking forward into the future: because that is what creativity is: creating a better future.