“There are islands in Cairo?”

I got that question earlier this week when I answered “Cairo” to the question “Which is the next island you are going to visit in your island world tour?”

And yes, there is. In the Nile. (Which means, I guess we can call them “Nileands”…

I am in Cairo for work but find time to visit Rhoda Island to go and visit the historic “Nilometer”.

A Nilometer was a “structure for measuring the Nile River’s clarity and water level during the annual flood season. It was a step-like structure that measured how high the flood would be. If it was low, there would be famine. If it was too high, it would be destructive. There was a specific mark that indicated how high the flood should be if the fields were to get good soil.” (Source Wikipedia.)

The Nilometer on Rhoda island is beautiful.

It was build way back in AD 861 and you can just see how important it was at the time. (Today the Nile is not flooding so uncontrollable anymore since Egypt has build damms to tame the mighty river.) When I see the workmanship, the effort and the attention to detail that went into the building of this amazing structure I am reminded of the greatness of the Egypt of the past. (Like you are over and over again when you visit the pyramids, the temples and the museums of Cairo and the rest of Egypt.)

But at the same time I can not but think about how a country that used to be so great can be so dysfunctional today. It is almost like if there is a curse on some countries where their once-greatness is stopping them from realising their full potential today.

You would think that someone growing up in a country that has a history such as Egypt would be inspired to want to build his or her country up to glory again. That the parents of these children would work hard to make it happen.

But time and time again when I come to Egypt I get the feeling of the opposite.

It’s like their history is holding them back, instead of pushing them forward. While here in Cairo I take time to listen to a powerful TED-talk by Wael Ghonim of Google Egypt who was instrumental in creating the “Arab Spring” in Egypt. Wael created a Facebook page that got more than 1 000 000 (!) followers and which got more than 100 000 people to go out and demonstrate to create a new and democratic Egypt in an event that escalated to a country wide uprising towards the regime. At the end Wael got thrown in jail and put in 11 days of total isolation and darkness until his colleagues in Google and Facebook friends got him released just days before Hosni Mubarak was forced to resign.

In his speech Wael talks about how disappointed he was over how the Internet and social media – which had started of as a tool to create positive change – had turned into an instrument that tended to create polarisation.

At the end of his speech he says: “(We have to) make it socially acceptable that we change our minds. Or probably even reward that.”

And then he asks about post in social media: “What if we had a metric about how many people changed their minds?”

I think he is on to something. But I think his insight is much bigger than just social media.

And it is definitely true when it comes to personal success. Realising that what we thought was right is wrong and having the courage to admit it and recalibrate our thinking is what makes us grow.

Regardless if it is something small (like realising that there are islands in Cairo) to something big (chancing your world view or religious belief for example) having the ability to reboot our brains to upgrade our worldview is perhaps the most powerful ability we can have.

To change our minds is not to admit that we were wrong: It’s to show that we know how to be a little bit more right.

Or in the words of the brilliant Winston Churchill: “To improve is to change; to be perfect is to change often”.

When I see the kids playing in the Nile next to the Nilometer I hope someone is going to send that message to them. Egypt deserves to be great again. 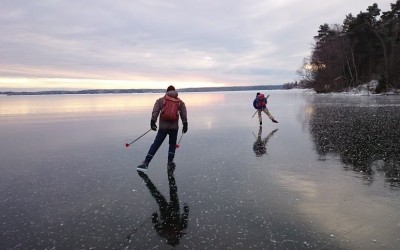